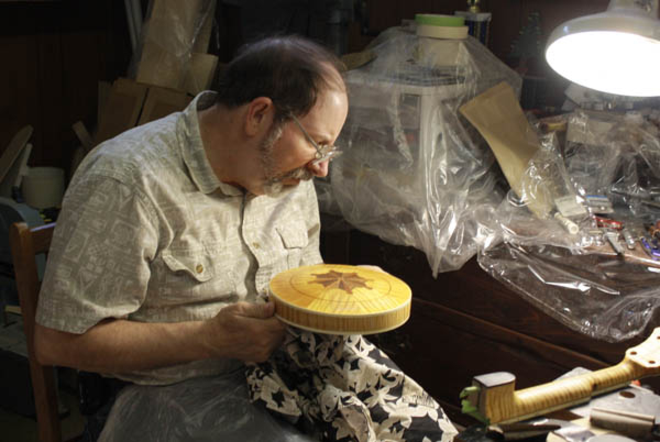 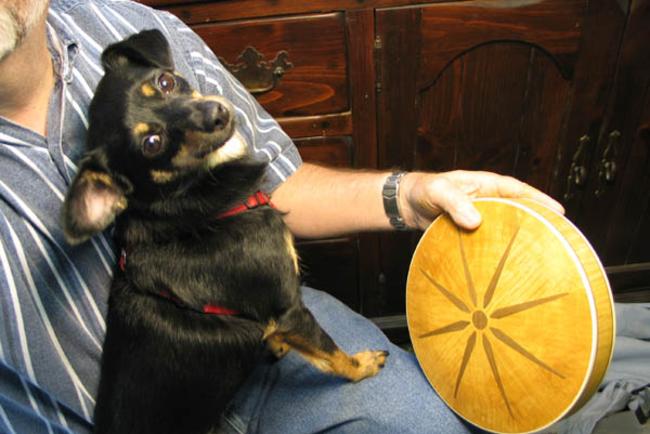 I grew up in the foothills of Western, North Carolina. I always loved the sound of the banjo. I was in a music store in Taylorsville, NC, and saw a Japanese "bottle cap" banjo for sale. $115 later, I was taking lessons from banjo teacher Brenda Daniels!

Soon, I wanted a better banjo, but could not afford one. While looking thru a "Frets" magazine, I spied an ad for a Stewart Macdonald catalog and sent for it. The building bug bit me! Having worked with wood since elementary school, I knew that I could build one. I ordered parts from Stew Mac, and told my banjo teacher that I was going to build myself a good banjo.  Brenda said, "That's nice...".

After several weeks, I walked into my banjo class carrying my new flat top mahogany banjo with engraved hardware, custom inlay on the neck, and a flower inlaid on the resonator back.  Brenda's jaw dropped and she said, "WOW... I've had students in the past say that they were going build a banjo, and some did... but none of them looked like this"! That was in 1978. That banjo was stolen in a house robbery in 1993, in Eastern North Carolina, Kinston, where I now live. Hopefully, I can move back toward the mountains before I die... I miss my mountain home place...

Since then, I have built several more banjos, but mostly mini banjos. They are 1/2 size of a "normal" banjo. People seem to love them, and that is what I have mostly built over the past 20 plus years.

Little Roy Lewis got me building them when He saw my personal mini banjo at the Kinston Winter festival several years ago. He wanted to buy it, but I didn't want to sell it. Six months later, I had another one built and gave it to him. He said that it was the best gift that anyone had ever given him!

I saw Little Roy about six months later when our group opened up for him at "The Grand Ol' Gospel" in Chocowinity, NC.  He told me then, that Ricky Skaggs had seen his mini banjo, and "Had a fit over it!" I decided then that I would build one for Ricky, which I did, and sent it to him six months later.

I don't have a fancy shop nor a lot of tools, but I enjoy building them... It's great therapy!  I have an enclosed porch on the side of my house... my inside shop, and a small room on the side of my garage... my outside shop.  Below are some random pictures that have been taken during the past years. ENJOY!